The organizers of the XVII Lublin Science Festival, which will be held from the 18-24 September 2021 under the slogan “Science without borders. Enjoy science!” cordially invite you to participate in the fifth of a series of competitions, which are part of the entire event!. “Let’s enjoy my science” is a competition that aims to show, in the most interesting form and context (perspective) of the applicant, a specific or a particular field of science and its achievements, as a means to creatively publicize various scientific and artistic disciplines around the world. 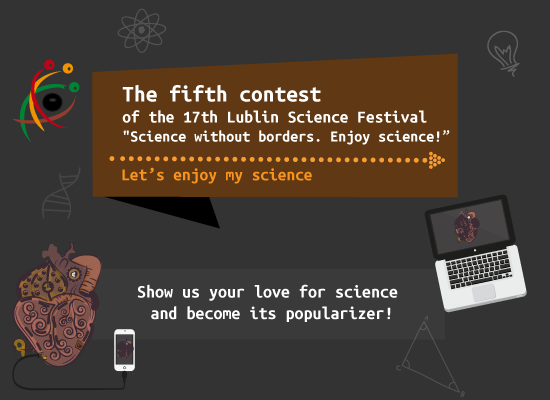 The competition aims to popularize scientific research and advancements in science as well as creative activities in society. In addition, to this, the competition intends to promote the importance of science and scientific discoveries that improve the lives of residents and bring further development of the economy of the region, a country and the world.

Why did you choose to study philosophy, sociology, economics, computer science, biology, chemistry or physics? Are you a keen archaeologist, an enthusiast of literary studies, or maybe your heart is closer to science and natural sciences? Based on this context, the participants’ task is to record a video presenting the field of study they have chosen and show what “science from their perspective” looks like. This can be through; for example by presenting an archaeological discovery, a work of art, an architectural project, or a selected experiment or phenomenon. The maximum length of the recording is 300 seconds. The work should be Uploaded to YouTube, and then the link of the recorded material attached in the application form.
The judges will select three winners from among the applicants who submitted works. The selection process will be guided by the criteria such as; the compatibility of the work with the theme of the competition, the original form of presentation of the chosen scientific / artistic discipline, the highest value in terms of dissemination, promotion and popularization of science and scientific research in society.

The winners will receive attractive prizes, the budget of which is up to 3000 PLN (gross)!

The competition is international and is addressed to students within Poland and abroad.

University of Life Sciences in Lublin